Based on the information I have received from my sources inside Iran—these are the sources who have been proven accurate in the past—The Islamic Revolutionary Guards Corps (IRGC) and the military organs of the Iranian regime are playing a significant and extensive role in furthering the regime’s nuclear weapons program. I have exposed in the past how the IRGC has gained control of the Iranian regime’s nuclear program.

One such institution that plays a pivotal role in the regime’s nuclear program is Imam Hossein University, operated by the IRGC.

Many tests and research for production of nuclear weapons take place at Imam Hossein University, which was established in northeast Tehran in 1986 during the Iran-Iraq war.

The Imam Hossein University is the main academic facility for training the personnel and commanders of the IRGC and members of the regime’s intelligence security. The Imam Hossein University, unlike other universities, is organized like a military structure. In specific, it has a student brigade and all students are under the command of this brigade. The chain of command at this university is company commander, platoon commander, and team commander.

The address for Imam Hossein University in Tehran, is near Fourth Square, Tehran Pars, Shahid Babaie Highway, near Hakimiyeh and Mini-city.

At present, IRGC Brigadier General Ahmadian, who is also Chairman of the Joint Chiefs of Staff of the IRGC, is the commander of Imam Hossein University. His deputy is IRGC commander, Majid Soleimanpour. The former commander of the Imam Hossein University is IRGC Brigadier General Ahmad Fazaeli, who held this position for six years and is currently appointed as an advisor to the Commander-In-Chief of the IRGC.

Based on verified information obtained from sources inside the Iranian regime, one of the nuclear tests conducted at Imam Hossein University used a Neutron Generator for neutron emission with high power. The tests were conducted under the supervision of an individual named Fereydoon Abbasi.

I have here the names of 21 professors and researchers belonging to Imam Hossein University who are mainly commanders and personnel of the IRGC.

One of them is Fereydoon Abbasi, whom I mentioned above. He is in charge of the physics group at the Imam Hossein University. Since the beginning of the 1979 revolution, he has been a member of the IRGC. He was present at the war fronts during the Iran-Iraq war. Following the war, he obtained a PhD in nuclear physics. From 1993, he has been a member of the physics college scientific board at the IRGC Imam Hossein University. He later became the department head of the college of physics. At the same time, Abbasi began work on nuclear research at the Ministry of Defense.

• Mohsen Fakhrizadeh, has been a member of Scientific Board of the physics college at Imam Hossein University since 1991. He teaches a class, one day per week at this college. He is the director of the nuclear program at the Center for Readiness and New Defense Technology.

• Mansour Asgari, is a member of the IRCG. He graduated in 1990 and is a member of Scientific Board at the physics college in IRGC’s Imam Hossein University and he teaches at the university 1 ½ day per week. Currently, he is one of the laser experts at the Center for Readiness and New Defense Technology, and works under the supervision of Fakhrizadeh.

• Mohamad Amin Bassam is a member of the IRGC. Currently he is one of the laser experts in the nuclear division of the Defense Ministry. He works under the supervision of Mohsen Fakhrizadeh. He is based and works at Parchin military complex in Tehran, where he conducts research on laser tests.

The role of the IRGC in the regime’s nuclear program goes back to 1983. In this regard, most of experts who were trained and educated by the Atomic Energy Organization of Iran’s Center for Nuclear Research were hired by the IRGC, following their graduation from a 2-year training program.

In order to gain access to nuclear science and technology, the IRGC’s research center has initiated an active relationship with other countries such as Russia and Pakistan. They have had negotiations and cooperation with these two countries.

In 1987 three IRGC officials met with Abdulghader (A.Q.) Khan (father of Pakistan’s nuclear weapons program) at least twice in Tehran. The IRGC’s delegation in the meeting was headed by Mohammad Eslami, chief of IRGC’s research center.

Starting in 1987, the IRGC, created several nuclear research offices in various Iranian universities. The most important ones were located at Tehran University and Shiraz University.

In 1993, due to a visit of the International Atomic Energy Agency to Iran, and in order to merge all nuclear research, the regime transferred all IRGC’s nuclear research centers and other military and university centers to the Defense Ministry.

Following this merger, the IRGC research center which worked on the nuclear issues, changed its name to “Ministry of Defense’s Educational Research” center. In addition, all IRGC’s nuclear experts were transferred to this center. Thus, the Defense Ministry’s nuclear research center is completely brought under the command and control of the IRGC.

The Defense Ministry’s main research center has its most recent title as the “Center for Readiness and New Defense Technology.” It works in conjunction with the IRGC Imam Hossein University, the Malek Ashtar University of the educational center of the Defense Ministry, and the Parchin research complex, in order to advance the regime’s nuclear projects. The main personnel as well as a large number of this complex’s experts are commanders and members of the IRGC.

Cleric Hassan Rowhani, former secretary of the Supreme National Security Council of the Iranian regime, was the chief nuclear negotiator with the three European Union countries (England, France and Germany) from 2003 to 2005. He spoke at the Supreme Council for Cultural Revolution in October 2005, and conceded to the regime’s concealment and deception. This speech was published several months later in Rahbord magazine (No 37, Autumn 2005), which belongs to the center for strategic research of the regime’s Expediency Council.

In his extensive remarks at Supreme Council for Cultural Revolution, Rowhani acknowledged that the regime had conducted several tests under the cover of academic research and tried to keep it hidden from the International Atomic Energy Agency (IAEA).

Rowhani said that “The IAEA is aware of some clandestine tests performed years ago. For example, we conducted a test in Tehran and the person in charge of the project was a university professor. One of his students had written a thesis about that test and the thesis was published. By accident, a copy of that thesis was obtained by the IAEA and we were not aware of that. Later, the IAEA showed us a copy of the thesis and suggested that we had performed this test. In another example that we assumed no one was aware; a university professor had participated in a project and had written a scientific article about it. Later, he publishes it in an international journal and the IAEA got a copy of it.”

In the same speech, Rowhani stipulated that the regime’s intention behind negotiations was to buy time to complete its atomic program’s details.

Regarding the freeze negotiated between the European Union and Iran, Rowhani stated that, “Another issue had come up and it was that the Europeans gradually realized that in areas which we had technological problems, we did not accept the suspension. We only accepted suspension in areas that we did not have technical problems. They recently have been telling us the same in negotiations; that the Isfahan Uranium Conversion Facility (UCF), we completed the work at this facility during the suspension period [suspension of all enrichment-related activities] which transforms the yellow cake into UF4, and UF6. At the same time when we were talking with Europeans in Tehran, we were installing the equipment in some of Isfahan’s sections and a lot of work had still remained to complete the project. In fact, we managed to finish the Isfahan project by creating a calm environment.”

In yet another occasion, Rowhani said: “I have to explain that we need an opportunity to turn our capabilities into practical reality. I mean, if one day we could have a complete nuclear fuel cycle, the world would be faced with a fait accompli and then the entire equation changes.”

I want to end by summarizing and explaining the significance of today’s revelations.

2. Iran is increasingly bringing its nuclear program under the control of the Revolutionary Guards, a further indication of a nuclear weapons program, as opposed to a civilian one.

3. Iran is moving its nuclear weapons program underground, and to military sites making it even more secretive, and off limits to the IAEA inspectors, while promising transparency in negotiations; there is a gap between Iranian regime’s deeds and words.

There are nuclear sites involved in research and development of Iran’s nuclear weapons program, which remain un-inspected by the IAEA inspectors to date. Among the sites that have not been inspected are:

• The Imam Hossein University of the IRGC in Tehran

• Lavizan II sites in Tehran, exposed since November 2004 • Major portions of Parchin Military Complex near Tehran exposed in March 2005 as being involved in laser enrichment

• A large number of IRGC commanders as well as Iranian nuclear experts involved in the nuclear weapons program have not been interviewed by the IAEA.

Supreme Leader Ali Khamenei has, in effect, declared war on the international community and has intensified the war with the people of Iran. He has brought to power, the new radical president, Mahmoud Ahmadinejad, a former IRGC terrorist commander, who is trying to remove all bureaucratic and practical obstacles to obtaining a nuclear bomb and intervention in Iraq.

The regime is driving the international community toward crisis, and Tehran’s nuclear clock is running out. But as Professor Tanter has stated at this press conference, the Iranian problem has an Iranian solution. The ultimate solution to regime change in Iran is by the people of Iran and the Iranian opposition. The people of Iran are ready for this change. Last year we witnessed 4000 demonstrations, strikes and acts of resistance throughout Iran, a sharp increase in compare to the previous year.

I concur with Professor Tanter’s call for multilateral oil, weapons, technological and diplomatic sanctions which should be immediately implemented against the Iranian regime by the UN Security Council to counter the Iranian threat.

At the same time, the international community should reach out to the Iranian people and remove any restrictions from all Iranian opposition groups and empower them by providing political support and recognition. A free and democratic Iran is the prerequisite and the guarantee for a peaceful and tranquil Middle East region. 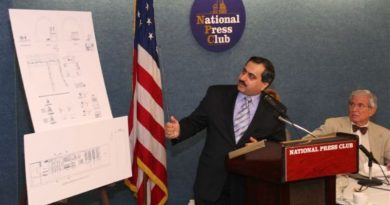