Juliet Huddy: For war on the nuclear standoff with Iran we’ve got, UN nuclear watch dog, the IAEA information on that. They said today “Iran has one month to suspended its uranium Enrichment activities or be referred to UN Security Council.

Mike Jerrick: Here is now Fox News Foreign Affair Analyst, Alireza Jafarzadeh, who in 2002 revealed, remember this, you did this Alireza back in 2002, revealed the existence of these nuclear sites in Iran. Nice job and you are still investigating and talking about it. What’s the latest, I understand you have information about underground tunnels now.

Alireza Jafarzadeh: Exactly, I have continued to reveal information ever since 2002. Just a few days ago I came out with information that suggested the Iranian Revolutionary Guards are actually involved in building a tunnel, a secret tunnel in the northeast of Tehran 150ft down and then it leads to four parallel tunnels that are used for nuclear research and development once it is completed. So it is a very serious development because this is the latest in a series of other tunnels Iran has been building. It suggests three things actually: Number one; Iran is increasingly moving its nuclear weapons program under ground and making it more protective, more leak proof. Second, they are increasingly getting the Iranian Revolutionary Guards increasingly in charge of the whole program and third,  they are speeding up the process while they are negotiating with the EU3 and the IAEA supposedly to suspend the program but to the contrary, speeding up the process.

Juliet Huddy: Well backfiring on them though because these are obviously supposed to be secret tunnels but they are being built in neighborhoods, residential areas.

Alireza Jafarzadeh: What they are doing is, they are actually doing that to conceal the existence of these tunnels. This one is right in a residential area to protect it against possible attacks.

Alireza Jafarzadeh: Air strikes absolutely, but I think this is serious because if Iran is allowed to continue with the speed that they are continuing, don’t forget Iran claimed in November of 2004 that they froze all of their enrichment related activities including their activities at the site in Natanz but the reality is that they never stopped it. The construction process in Natanz has continued ever since and they are closer to completing the program than they have ever been. 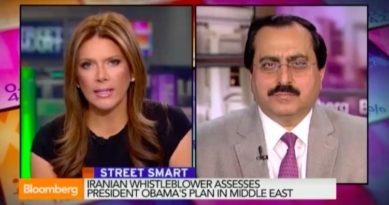 A blow to nuclear bomb making of Ayatollahs in Iran

Interview on the Rita Cosby Show