Today, according to information obtained by Iran ‘s main opposition, the People’s Mojahedin Organization of Iran (PMOI/MEK), we would like to make public for the first time exclusive details on a major top-secret and strategic nuclear enrichment site in the town of Abyek, 120 kilometers west of the Iranian capital, Tehran . The Behjatabad-Abyek nuclear enrichment site is code-named 311, and is near Qazvin.

The details on this site were made possible by the several-year of extensive and vigilant investigation, research and intelligence work by the internal network of the PMOI. The work, as complicated as it has been entailed serious risks and danger for the sources.

The construction of this site began in early (February or March) 2005 and 85 percent of the construction work on it has been completed. The site is built deep inside mountains to withstand aerial bombings and confirms that the regime is in hot pursuit of nuclear weapons and will in no way abandon it.

The Armed Forces General Headquarters, headed by Major General Hassan Firouz-Abadi, and the Ministry of Defense, headed by Brig. Gen. Ahmad Vahidi, have embarked on building this new secret site, located between the cities of Abyek and Qazvin . The project began under the former Minister of Defense who is currently Minister of the Interior, Mostafa Mohammad Najjar.

The date when work began on this site is significant because it proves that contrary to its deceptive tactics, implying that the regime had stopped its military nuclear activities in 2003, this type of work has gone underground and expanded.

So far the regime has spent 100 million dollars on the project, but experts involved in the projects have said that it has unlimited budget. For example, one of the companies affiliated with the MoD, which is tasked with building some of the facilities in the site has received 25 million dollars in the past three years alone.

The extensive dimensions of the site show that the regime’s nuclear weapons program is far larger than what the International Atomic Energy Agency knows about. Specifically, the enrichment program is much more extensive than what has been revealed to the IAEA, which explains why the Iranian regime is refusing to ratify the Additional Protocol.

This site is far more important than the Fardow site near the holy city of Qom, which explains why the MoD has taken extraordinary concealment measure to avoid its detection.

According to a confidential directive issued by the Armed Forces’ General Headquarters and the Ministry of Defense to all engineers and technicians as well as others involved in the planning and building of this site, the disclosure of the site will irreparably undermine the regime’s international standing and would have unimaginable repercussions.

All persons involved in this project as under the tight control of the MoD’s counterintelligence department. MoD agencies and highest ranking commanders of the Ministry are monitoring and controlling the building of this site.

To effectively thwart Tehran ’s nuclear drive, a two-pronged policy is imperative. The first is to impose comprehensive sanctions on the regime. The second is removing the barriers placed on the path of the opposition, particularly the main opposition, the PMOI. The terrorist label against the group has acted as a major impediment to democratic change in Iran .

It has also hindered its ability to discover and transfer information on the regime’s hidden nuclear activities. If President Obama and the US government are serious in their effort to stop Tehran ’s nuclear weapons program, they should not have tied the PMOI’s hands. They are fully aware that a vast majority of the information on Iran ’s nuclear program was revealed by the PMOI and the National Council of Resistance of Iran. Were it not for the PMOI, the mullahs would have had the bomb by now.

Soona Samsami was US Representative of National Council of Resistance of Iran until August 2003; She first exposed the Kala Electric nuclear site near Tehran in February 2003.

Alireza Jafarzadeh, author of The Iran Threat, was media spokesman for the National Council of Resistance of Iran in the United States until August 2003. Jafarzadeh exposed the uranium enrichment facility in Natanz and heavy water facility in Arak in August 2002 which triggered the IAEA inspection of Iranian sites since 2003. 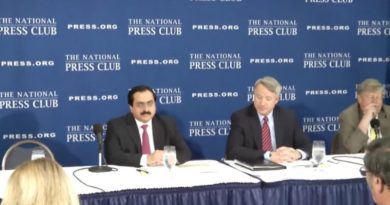