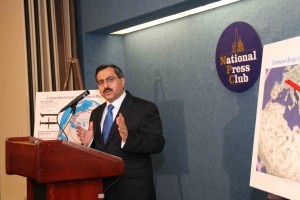 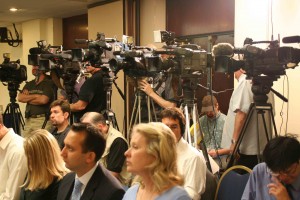 The mullah regime insists that its meetings and contacts with the Pakistani nuclear scientist, and the father of Pakistan’s nuclear bomb, Abdolghader (A.Q.) Khan have been conducted in non-military context. But this is a sheer lie and the mullah’s regime hides its true intentions in this regard. Right now, I would like to introduce A.Q. Khan’s main counterpart within the Islamic Revolutionary Guards Corp (IRGC). I also ask the International Atomic Energy Agency to interview him as soon as possible.

3-     Following these meetings, relations between IRGC and AQ Khan network became very close and Pakistan became one of the main countries to help Iran further its nuclear research goals.

4-     At present time, Mohammad Eslami is a Brigadier General of the IRGC and leads the Defense Ministry’s institute for defense education and research. 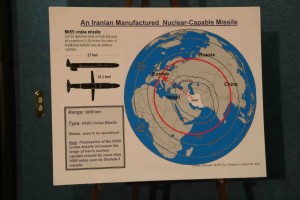 Acquiring a Nuclear-capable Missile with the Range of 3,000 km

The Iranian regime had pursued the missiles project with the goal of acquiring missiles capable of carry a nuclear warhead.

As such, the regime has set in motion a twofold plan;

a) An attempt to build missiles with nuclear warhead capability

b) To import such missiles and copy them, using reverse engineering

This was the intention when Iran secretly purchased cruise missiles from Ukraine.

Four years after receiving the cruise missiles from Ukraine, the Iranian regime, has now mastered the technology through reverse engineering process.

In a meeting of the regime’s Supreme National Security Council, Defense Minister, Ali Shamkhani declared that by acquiring this 3,000 km range missile with nuclear warhead capability, the Iranian regime is able to threaten the European countries.

As you know, on January 28, 2005, a member of Ukrainian Parliament Mr. Hryhoriy Omelchenko, wrote in a public letter to the Ukrainian President Viktor Yuschenko, that Ukraine had illegally sold (in 2001) cruise missile to Iran.

In an interview with the NBC News Network, Viktor Yuschenko said that the previous Ukrainian government had been illegally selling long range missiles with nuclear warhead capability to Iran.

In his TV interview, Yuschenko showed the audience a copy of the contract which stated that 20 missiles were sold to supposedly Russia when in fact they were sold to Iran.

As well, the Ukrainian prosecutor said to the Financial Times newspaper that in 2001, his country sold 12 cruise missiles to Iran and six missiles to China. All missiles had the range of 3,000 km.

Today I wish to elaborate on the fate of the 12 cruise Kh-55 missiles that were sold by Ukraine to Iran:

1-     These missiles have nuclear warhead capability. There are 12 missiles and they were received by Iran’s Defense Ministry. Subsequently, they were delivered to Islamic Revolutionary Guard Corps (IRGC) missile unit. The IRGC, reconstructed the missiles and then transferred them to its secret centers. As of right now, these missiles constitute a portion of IRGC’s missile capability.

2-     Two of the above received missiles were delivered to Engineer Karbalaii, director of the cruise center, a division of the organization of Air & Space within the Ministry of Defense. Two missiles were transferred to cruise industries located in Parchin military complex in order to undergo a reverse engineering process. The cruise systems industries group is known as “Plan 4.”  The “Plan 8” is the chemical division related to the cruise industry.

3-     The individuals forming the cruise industry are highly advanced experts in defense industry, many of whom have obtained their advanced training from countries such as Russia, France, Germany, China and North Korea.

4-     Various parts of the Ukrainian Kh-55 cruise missiles have been separated and transferred to different divisions within the cruise industry.

5-     Within the Parchin military industries, there are divisions called “Directorate of Research,” “Directorate of Education,” “Directorate of Fuel,” and “Directorate of Warhead.” These experts have performed reverse engineering on various cruise missile parts in order to mimic its technology. Based on most recent reports, during the past four years, the experts from cruise research division have been able to rebuild the pieces of these missiles. The Iranian regime has gained knowledge and access to this missile’s technology.

6-     In a meeting of the Supreme National Security Council, headed by Khatami and with the presence of Defense Minister, Ali Shamkhani, he reported that currently, in addition to the cruise missiles which the regime had already built, Iran has been successful in acquiring the technology for Kh-55cruise missiles and Tahran is in the last stages of reproducing this missile. At this same meeting, he mentioned that by acquiring this cruise missile with 3,000 km range, the regime has been able to threaten the European countries. He clarified that this missile, contrary to Scud and Shahab 3, is very difficult to intercept and have a defense against it.  The Kh-55 cruise missile flies at low altitude, making it easier to evade detection. 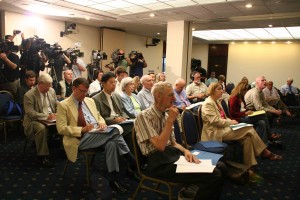 2)      The cruise systems industry group is one of the most important divisions of the organization of Air & Space of the defense industries. Its extensive centers in Parchin and Lavizan, Tehran and Mashhad, demonstrates the significance of this industry for the regime’s Defense Ministry. The names of some divisions and directors are as follows:

–         Engineer Karbalaii, is the chief of staff of the cruise systems industries located in Parchin military industries.

–         Engineer Tolouii, is the head of Research Center for cruise systems located in Lavizan, Tehran.

–         Engineer Khalili, is the head of the “Basamad Azma” company (this company operates for cruise systems.)

–         Mullah Yasaghi is the head of Khamenei’s delegation within the Parchin cruise systems industries.

3)      It should be reminded that strengthening the missile system has been a pivotal part of the mullah regime’s military strategy. Following the 1988 cease fire with Iraq, the Iranian regime adopted the following Preventive Defense Strategy based on the following 3 fundamentals:

–         The ability to sustain high casualties; For this goal, the Bassij (mobilization) force was created within the IRGC.

–         To acquire the missile technology, considering the weakness in Air Force and in order to prevent the air attacks.

–         To acquire nuclear bomb in order to prevent the enemy attacks.

4)      In this strategy, given the capability of carrying a nuclear warhead, the cruise missile becomes much more significance.  It can carry a nuclear warhead and it allows the regime to reach areas in far distances.