In a move which could lead to a deeper probe of the dark world of Iran-backed terror networks in Iraq and their links to Lebanon’s Hezbollah, U.S. troops detained a senior official in the Iraqi government, Ali al-Lami, at the Baghdad airport as he returned from Beirut. A U.S. military statement said al-Lami, suspected of ties to Iran, was taken into custody on August 28, for his role in planning a June 24 suicide bombing that killed ten people, including four Americans. “The man has been known to travel in and out of Iraq to neighboring nations including Iran and Lebanon, where it is believed he meets and helps run the Iranian-backed Special Groups in Iraq,” the statement said.

For nearly three decades, the mullahs’ terror machine and its many tentacles have been reaching outward. Since 2003, Iraq has been singled out as a strategic training ground for Tehran’s terror machine. While some aspects of this terrorist campaign have been exposed in recent years, little has been said about Tehran’s export of suicide bombers.

When the ayatollahs took 52 Americans hostage in Tehran in 1979, they were emboldened by the wavering international response. They plotted another run – testing Washington’s resolve in April 1983 with a suicide truck bomb attack on the American Embassy in Beirut, killing 63 people. On October 23 the same year, another suicide truck bomb targeted the U.S. Marine barracks in Beirut, killing 241 Marines. The Americans packed up and left, and the U.S. policy of appeasing Iran was born.

When U.S.-led forces attacked Iraq, Tehran intensified its recruitment and training of Iraqi suicide bombers as an integral part of its multi-pronged terror campaign. These efforts heightened after the Islamic Revolutionary Guards Corps’ (IRGC’s) rise to power in all branches of the theocratic regime. This cunning alliance between Supreme Leader Ali Khamenei and the IRGC’s top brass, catapulted former Qods Force commander Mahmoud Ahmadinejad to the presidency in 2005.

Under Ahmadinejad, the industry of recruiting and training suicide bombers — Iranian or otherwise — has grown exponentially. In addition to clandestine training centers, several state-sponsored centers, billed as “non-governmental organizations,” are actively and openly recruiting and training what Islamic extremists call “poor men’s missiles.” During his tenure as mayor of Tehran, Ahmadinejad was instrumental in creating these terror outfits. He provided political cover for them and placed the municipality’s resources at their disposal.

One, the “Headquarters for Commemoration of Martyrs of the Global Islamic Movement,” gained notoriety in 2004, when it was inaugurated as an NGO whose mission was to recruit “suicide volunteers” to combat “World Arrogance.” Spokesman Mohammad Ali Samadi told a state-run daily on the sidelines of a three-day event commemorating “martyred” suicide bombers that nearly 2,000 people had already registered. The application distributed at the event had three categories of suicide operations from which to choose: those targeting U.S.-led forces in Iraq, Jews in Israel or Salman Rushdie.

On October 2005, only months after Ahmadinejad’s inauguration, Samadi told the media that “40,000 have already signed up for martyrdom-seeking operations,” boasting that they had been, “organized into three battalions of volunteers with more to follow in due course.” Samadi later said in July 2006, that the number of would be bombers had grown to 55,000.

The IRGC and its elite terrorist arm, the Qods Force, direct the activities of these terror NGOs, and top IRGC commanders regularly attend their public events. For example Brig. Gen. Salami, a confidant of Ahmadinejad and Director of Operations or the IRGC Joint Chiefs of Staff, was the keynote speaker at the commemoration event. His address was, not surprisingly, entitled “Suicide operations: A security and military strategy perspective.”

Mohammad-Reza Jafari, a senior IRGC officer, told the pro-Ahmadinejad weekly Parto Sokhan in summer 2005 that a military base under his command, the “Lovers of Martyrdom Garrison,” had begun to recruit and train volunteers for “martyrdom-seeking operations.” He added that “a Martyrdom-seeking Division will be formed for each province in the country, organized in brigades, battalions and companies.” In an earlier interview with another publication, he stressed his ties with Ahmadinejad, saying: “I have personally met Dr. Ahmadinejad, the distinguished mayor of Tehran. He is a Bassiji [hard-core fundamentalist] and I recommend that other officials make him a role model.”

Brig. Gen. Mohammad Kossari, another senior IRGC commander and director of the Security Bureau of Iran’s Armed Forces, ominously referred to the U.S. and Coalition forces in Iraq in fall 2005, saying: “We know all of the enemies’ weak points and know what to do against them. Today, we have martyrdom-seeking individuals who are ready to strike at these sensitive points.”

Hassan Abbasi, director of the “Doctrinal Analysis Center for Security without Borders,” the IRGC’s think tank for ideological theories rationalizing the regime’s strategic use of terrorism, was even blunter. On April 16, 2006, the Sunday Times of London reported that the IRGC had formed a force called the Special Unit of Martyrdom-Seekers to organize more than 40,000 trained suicide bombers “to strike at British and American targets if the nation’s nuclear sites are attacked.” It quoted Abbasi as saying: “We are ready to attack American and British sensitive points if they attack Iran’s nuclear facilities.” He added that 29 western targets had been identified, some of them “quite close” to the Iranian border in Iraq.

To be sure, the ayatollahs seek to score psychological and propaganda points with their hype about suicide bombers. Sowing fear is their favorite method of intimidating their “enemies,” both without and within. At a minimum, they believe this terrorist saber-rattling will inject some badly needed vigor into their fast depleting ideological base. Nothing energizes these guys’ fanatic followers better than the specter of a “human missile” blowing up “infidels.”

It is, however, very naïve and downright reckless to discount their threats as hollow rhetoric. Just imagine the death and destruction, if even a small fraction of the purported 55,000 suicide recruits turns out to be the real deal. Nevertheless, the Ayatollahs are extremely vulnerable inside the country, as anti-government demonstrations mount throughout Iran. Is the West finally prepared to recognize this and adjust its policies accordingly? 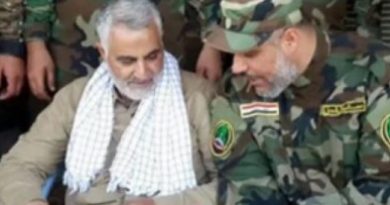