Iran’s nuclear chief, Vice President Gholam Reza Aghazadeh said on Wednesday February 25 that the country has increased the number of centrifuges at Natanz uranium enrichment facility to 6,000, the latest show of defiance to U.N. demands it halt the enrichment program. He added, “It is time that western countries and especially the new American administration face the facts and acknowledge a nuclear Iran.”

In late February, the quarterly report by the International Atomic Energy Agency (IAEA) on Iran’s nuclear program was a damning dossier of Tehran’s defiance. The international will to stop Tehran’s uranium enrichment is manifested in five UN Security Council resolutions.

Few in foreign policy circles are optimistic that President Obama’s direct engagement diplomacy can resolve the nuclear challenge posed by Tehran. How can engagement possibly succeed when the interlocutor is a religious tyranny, has no respect for the fundamentals of international relations or human rights, and has been appropriately designated the most active state sponsor of terrorism?

But the IAEA report underlines Tehran’s continued refusal to respond to specific questions about the military nature of its nuclear program, and its refusal to provide access to the sites, documents and individuals specified by the agency.

The IAEA findings clearly point to the existence of secret enrichment facilities in addition to the Natanz nuclear site disclosed by Iran’s main opposition group, the People’s Mojahedin of Iran (PMOI), (which I am affiliated with) in 2002.

More ominous, the 5-page report indicates that the ayatollahs’ regime now has nearly 2,230 pounds of low-enriched uranium, more than enough to produce the high-enriched uranium needed to make a bomb. This finding alone — which comes on the heels of Iran’s satellite launch in February using long-range missile capabilities — has critical ramifications for President Obama’s Iran policy review. Iran’s nuclear clock is ticking — a lot faster than previously believed — and its leadership, perceiving Washington’s “positive signals” as a sign of weakness, is hell-bent on pressing ahead.

Sir John Sawers, Britain’s current ambassador to the United Nations, revealed something of the strategic importance Tehran attaches to its nuclear weapons program. “The Iranians wanted to be able to strike a deal whereby they stopped killing our forces in Iraq in return for them being allowed to carry on with their nuclear program,” Ambassador Sawers recalled in his interview with BBC. Iranian officials proposed: “We stop killing you in Iraq, stop undermining the political process there and you allow us to carry on with our nuclear program without let or hindrance.”

Few in foreign policy circles are optimistic that President Obama’s direct engagement diplomacy can resolve the nuclear challenge posed by Tehran. How can engagement possibly succeed when the interlocutor is a religious tyranny, has no respect for the fundamentals of international relations or human rights, and has been appropriately designated the most active state sponsor of terrorism?
Iran’s leadership is well aware of the power that a nuclear weapons capability — much less an actual bomb — would bring. Their nuclear program is not about fulfilling Iranian national pride — it is about becoming a regional power and creating an Islamic empire. In August 2003, Supreme Leader Ali Khamenei said, “Any weakness or surrender on our part [over the nuclear issue] would be the greatest strategic error.”

The IAEA report, particularly its finding that Tehran has passed the enrichment threshold, underscores the failure of efforts to negotiate a resolution with Tehran. Waiting for the outcome of a sham presidential election in June in hopes that a “moderate” will emerge is folly. Supreme Leader Khamenei determines nuclear policy, and while Iran’s various factions may differ over details of the nuclear weapons issue, they do not disagree about the substance or imperative of this goal.

Former “pragmatist” president Hashemi Rafsanjani revived Iran’s dormant nuclear program during his tenure. Former “reformist” president Mohammad Khatami oversaw the unprecedented expansion of the nuclear facilities, among them Natanz and Arak, as European capitals rolled out the red carpet for him. And “radical” current president Mahmoud Ahmadinejad has taken Tehran to the jumping off point for making an actual atomic bomb.

The bottom line: no more nuclear “rope-a-dope.” A nuclear-armed Iran is “unacceptable” as President Obama declared many times during the 2008 campaign. The administration must actively and expeditiously formulate a viable strategy to stop Tehran from buying time. Washington must think outside the box and focus instead on the only option Tehran’s rulers consider as real leverage: Iran’s democratic resistance. Any strategy by the Obama administration must have the Iranian opposition factor at its core –empowering it by lifting its ban against it–to have a chance for success. 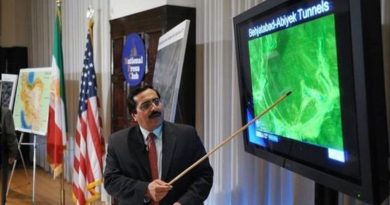