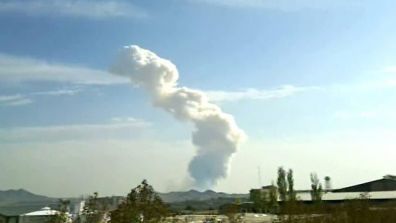 Last month, there was an explosion at a secret missile base near Tehran, and the head of Iran’s long-range missile program was killed along with 17 top members of Iran’s Revolutionary Guard Corps.

Alireza Jafarzadeh, author of “The Iranian Threat” who first revealed intelligence that Iran had a secret uranium enrichment facility at Natanz, says there are indications Iran was testing a new solid fuel rocket. “As they were doing the final preparations, fully loaded with a warhead and the fuel, it exploded. And with it, it took the entire crew of the missile team, including the top commander and the top missile expert,” Jafarzadeh said.

The 3D View of Iran: Viable Military Option a Must in Nuclear Deal