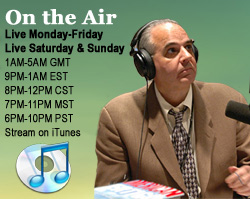 Listen to the show

Monday 1020P (720P Pacific Time):   .Alireza Jafarzadeh, SPConsulting, The Iran Threat; President Ahmadinejad and the Coming Nuclear Crisis, in re:  Iran.  Big meeting – P5+1 (UN Security Council plus Germany) – in Turkey: no apparent substance other than discussing another mtg five weeks hence.  Many journalists, lots of energy, high hopes – and no result. Teheran’s agenda looks to have been to buy time so it could continue to develop its nuclear fuel cycle. Again. Iran will change no behavior; all the issues of concern to the IAEA and the intl community (HEU enrichment, et al.) continue. MEK formed 40 years ago, many members and supporters have been executed by the Iranian regime; some survivors went across the border into Iraq, 3,400 formed Camp Ashraf. In 1997, after Khatami (so-called moderate) acceded to power, Pres Clinton decided to accommodate the regime by declaring the MEK a terrorist organization.  Subsequent administrations, including this one, declined to change the category. Over a hundred US Congressmen are committed to removing the designation.